Ethereum’s native token Ether (ETH) has rallied by more than 415% this year to over $3,800, and two major bullish patterns developing on its charts highlight the scope for another upside move, ultimately toward the $6,200-$6,500 price range.

The first decisive break above the psychological $4,000-mark, which serves as a resistance trendline to five-month-olds ascending triangle and a cup and handle pattern, could trigger a textbook price rally in the coming sessions.

In detail, the $6,250-level appears as the profit target for the Ascending Triangle pattern, calculated by measuring the widest distance between its horizontal and rising trendlines and adding the output to the potential breakout level around $4,000. At the same time, the Cup and Handle pattern, which has a slightly lesser success rate than Ascending Triangle, shows a potential run-up toward $6,550 in the coming sessions, up by 56% from current levels.

Its profit target emerges by measuring the distance between the Cup’s right peak and its bottom and adding the outcome to the potential breakout level around $4,000—the same as Ascending Triangle.

One of the primary catalysts that support the two bullish indicators is trading volume, which has been falling across the formation of the said patterns. That suggests a weak consolidation sentiment among traders. Meanwhile, the relative strength index (RSI) below the overbought threshold of 70 also shows adequate room for a bull run.

The optimistic outlook for ETH appears in the wake of a market-wide upside boom led by Bitcoin’s (BTC) 29% month-to-date price rally.

According to CryptoWatch, the 30-day correlation coefficient between Bitcoin and Ethereum sits near 0.89, meaning that the success rate of the two assets moving in sync is 89%.

Ecoinometrics, a crypto-focused newsletter service, noted the positive correlation as it highlighted the Ether price’s reaction to Bitcoin “halvings,” a pre-programmed event that slashes the BTC’s issuance rate by half every four years, against its 21 million supply cap.

The portal studied Bitcoin and Ether’s price reactions to the previous two halvings and applied the dataset to predict their tops after the third halving, which took place on May 11, 2020. As a result, it anticipated BTC to rise 29.5x times to hit $253,800 by late November 2021. 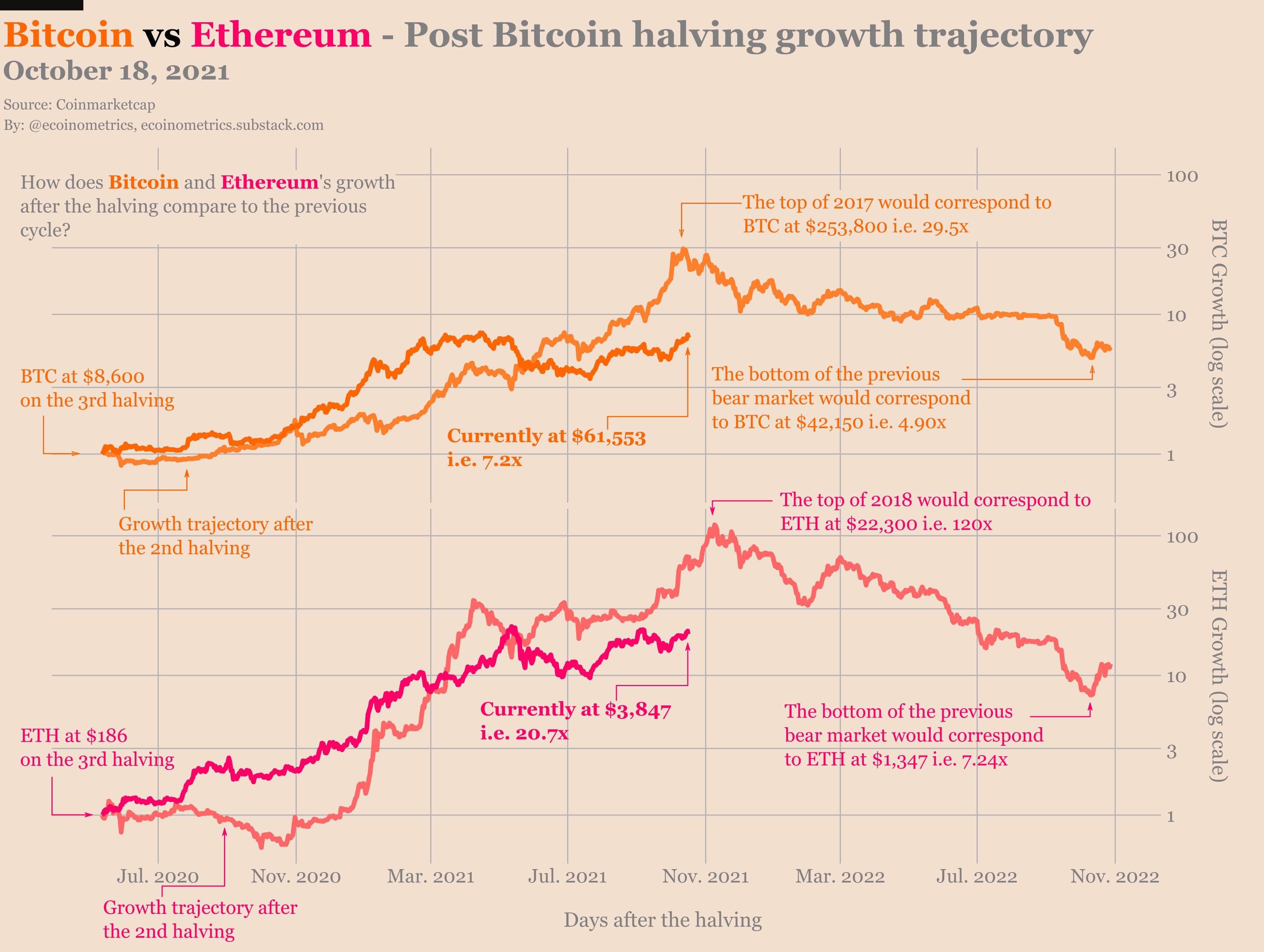 Similarly, Ecoinometrics highlighted $22,300 as Ether’s price target in the same period, based on its 120x price rally following the second Bitcoin halving.

More bullish cues for Ethereum appeared in the form of its ongoing supply squeeze.

Notably, the total number of Ether deposited into the Ethereum 2.0 smart contract reached an all-time high of around 7.98 million ETH on Monday. These tokens remain locked/untransferable for one year or more. Meanwhile, the total amount of Ether held across all exchanges continued to stay around its record low levels, with CryptoQuant reporting 18.187 million ETH in reserves on Monday compared to 23.323 million ETH an year ago.